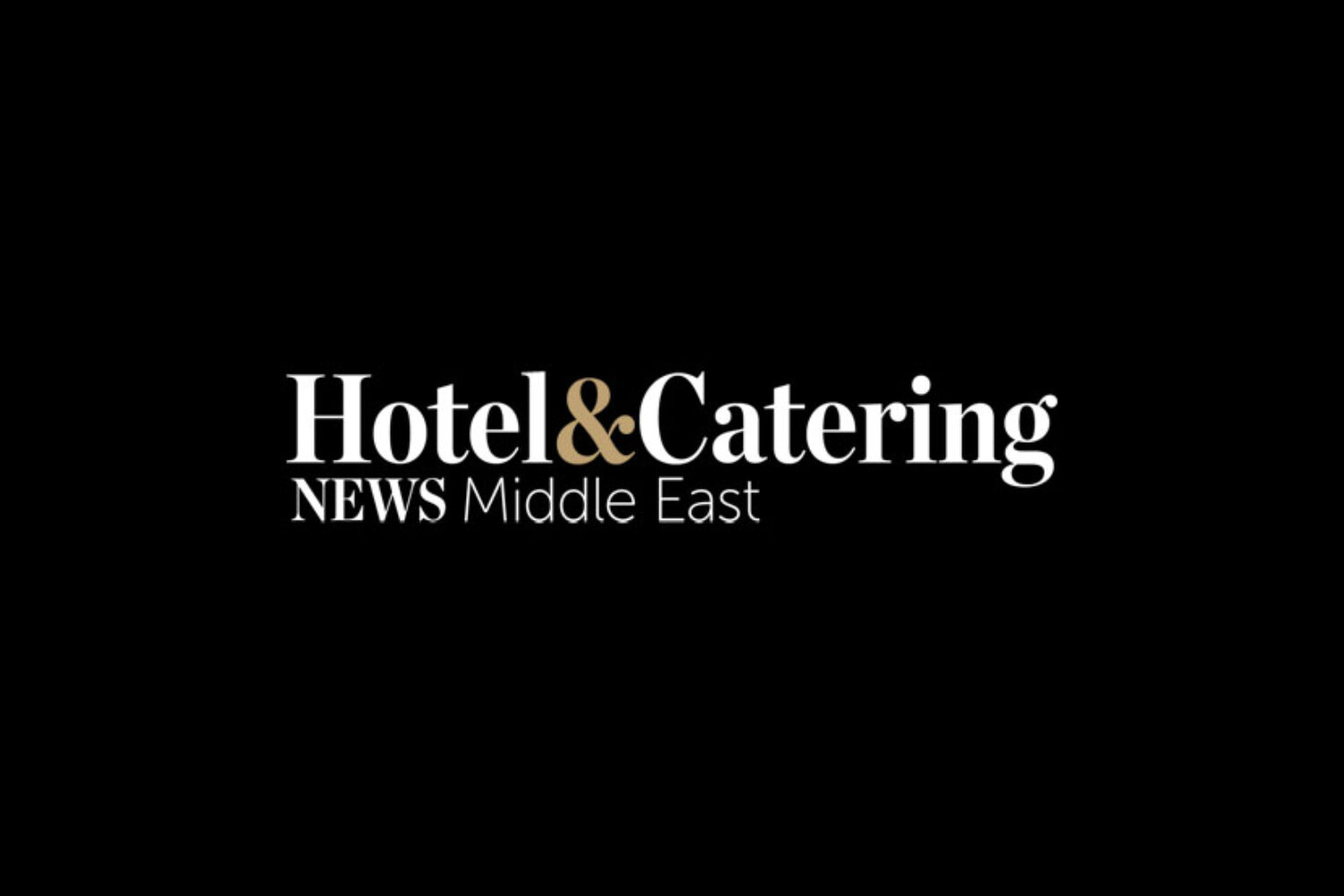 Former managing director at Accenture Strategy Middle East & Turkey for the past nine years, Raffaella Campagnoli is now the founder and managing director of LIRA Strategy Partners, a company that specialises in accelerating ecosystems.

I was reading an article stating that the massive impact that COVID-19 has had on the global food system, requires a close review: it’s highly possible that we will soon face some fundamental problems, which we will not be able to ignore anymore.

Bloomberg reports the following: ‘France expects some 200,000 workers will fail to show up this year. Coldiretti, an association of Italian farmers, estimates the country will be short as many as 100,000 foreign laborers. Germany typically has 30,000 migrant farm workers in March and 80,000 by May, but this year only a fraction of that number have shown up, according to Agriculture Minister Julia Kloeckner’.

The Agricultural Outlook 2018-2027 published by the Food and Agriculture Organization (FAO) of the United Nations states that of the total land area of the MENA region, only one-third is agricultural land (cropland and pastures), while only 5% is arable (cropland).

The rest of the land is either urban or dry desert. Due to the dry climate, about 40% of cropped area in the region requires irrigation. Only 4% of land in the region has soils judged of high or good suitability for rain-fed cereal cultivation and 55% is unsuitable.

This means a strong dependency on import, not just from Europe, but from other main export Countries like India, for example, one of the larger fruits and vegetable supplier for the Middle East. According to Mumbai Mirror, the cancellation of flights to Europe and Middle East due to COVID-19, fruit and vegetable exporters in Mumbai have reported 25% drop in business: also where the flights are operational, the charges have gone up by two-and-a-half times. Taking the sea route isn’t a feasible option either due to prohibitive costs.

Moreover, for the countries whose share of total merchandise export earnings spent on food imports is high and volatile, like the Middle East, the stability of international food prices is a major concern. Even if export earnings can be maintained, these countries face significant risks associated with spikes in world food prices.

According to the UAE Ministry of Economy, in 2015 Dubai imported about 11 thousand tonnes of fruits and vegetables per day, of which 30% to 40% where re-exported to many of the neighbouring Countries in the Region. According to Kaleej Times, in 2019 The UAE imports 80% of its food, which is a major challenge also for the Country’s food security. Similar figures are disclosed Saudi Arabia: according to FoodExport, KSA depends on imports to meet about 75% of its food needs.

For Middle Eastern countries, it’s fundamental to find a way to become autonomous in food production, especially on the categories generating a higher productivity per drop of water, like fruits and vegetables.

What are the answers? Well, the evolution of food tech can be one.

Driving forces shifting the interest in food tech include the spread of pandemics, climate change, population growth, digitalization opportunities, as well as organic food consumption and health-focused consumers: in a few years, a traditionally low-tech, complex industry like farming opens a variety of applications to the global chain.

Vertical farming is indeed one of the categories where VCs and visionary investors are focused on, since a few years:

According to a set of reports published by Allied Market Research, titled, “Vertical Farming Market by Component, Structure, and Growth Mechanism” the global vertical farming market size was $2,23 billion in 2018 and it is projected to reach $20 billion by 2026, growing at a CAGR of 24.6% from 2019 to 2026. Depending on growth mechanism, the market is sub-segmented into hydroponics, aeroponics, and aquaponics. The hydroponics segment contributed nearly 40% of the share in 2018.

Vertical farming is expected to become an enhanced substitute of traditional farming, as it produces 70% more crop and uses almost 90% less water as compared to the traditional farming. Over the last years, technology has incredibly evolved 8figure 1 ): vertical farming increased its business model efficiency bringing to life a full ecosystem showing significant benefits to the vale chain:

Thomas explained that their business model is not simply based on delivering a farm infrastructure but a real ecosystem: it’s a platform where mechanics, robotics, IT, AI, Machine Learning, an Agronomic knowledge base and virtual reality are mixed together in order to allow anyone to grow anything, anywhere.

The ONO Exponential Farming business model, indeed, is focused on delivering the most advanced robotic solutions possible to help agriculture to move forward, based on cloud-driven machineries.

The company has patented a scalable and modular vertical farming platform which is fully automated, and which can be used for the intense cultivation of vegetables, algae and insects. The automation is based on robotics and software with machine learning and AI systems.

According to ONO Exponential Farming, the level of productivity is incredible: for lettuce, for example, the productivity per square meter is about 8,000% (eight thousand %) versus the open field farming and 241% versus the vertical farms concepts developed some years ago; the solution is showing high level of sustainability, saving about 70% of consumption per kw-Ton versus traditional vertical farms.

Some Middle East Countries (or, better, cities) have already made some interesting plans: Dubai Industrial City has planned to launch its new high-tech vertical farm, Badia Farms, in Q2-2020 for contributing to the UAE’s commitment to becoming more sustainable: hydroponic technology is a major contributor to agricultural sustainability and food diversity, as it improves crop production and lowers its cost.

In Saudi Arabia, for example, agriculture accounts for 85% of the water consumption in the Country. Most of the water utilised for the cultivation of fruits and vegetables is drawn from ground water resources and desalination plants.

Water from these plants is highly subsidised; hence, the government plans to diversify the type of crops grown in the region to those that consume less water. Wondering that this initiative is also supporting the realization of Vision 2030, where KSA will become one of the major touristic destinations in MENA and food supply will surely represent a significant challenge.

What is the opportunity for Middle East?

The food supply issue is both short term and long term challenge: building up ecosystems of capabilities (Figure 2) by partnering with startups, researchers, technology providers, agricultural experts, innovators, can be – once again – the answer to the urgent need of becoming more autonomous by offering sustainable and safe solutions to the market: 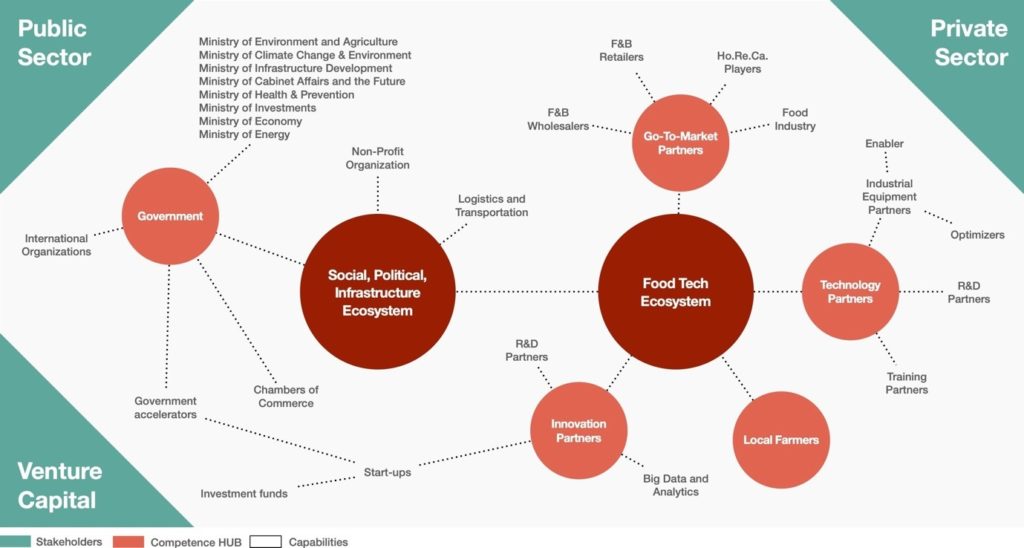 Food security primarily relies on availability, accessibility, and affordability of food, which can easily be achieved by means of vertical farming. With technological advancements, vertical farming in supermarket and retail centers will positively augment growth in the industry, which will not only reduce the transportation time and cost, but will also minimise the chances of spoilage.

Scarcity of domestic production resources and dependence on third parties has highlighted the urgent necessity for innovative, cost effective and automated technological solutions in the food production process. On the world scene, the indoor farming innovation is attracting great interest above all for the opportunity to guarantee results in terms both of quantity and of quality, and many initiatives have been launched to find the most effective technological and operational solutions.

The emergency produced by the COVID-19 pandemic has also underlined the need to reduce reliance on the human presence in the food production process essential for human survival, and the fact that robotised automation is no longer an alternative, but a necessity.
(Source: Hotel News)